Amigo Animal Clinic is proud to serve Phoenix, AZ and surrounding areas. We are dedicated to providing the highest level of veterinary medicine along with friendly, compassionate service.

We believe in treating every patient as if they were our own pet, and giving them the same loving attention and care. We are a group of highly trained, experienced animal lovers who are devoted to giving our patients the best care possible. 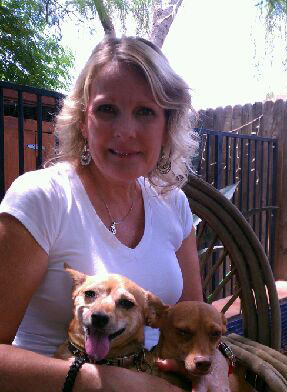 Dr. Jensen was born and raised in the Midwest - Omaha, Nebraska to be exact. She knew at a young age that she wanted to be a veterinarian. Now you would think in the Midwest everyone lived on the farm,...

Dr. Jensen was born and raised in the Midwest – Omaha, Nebraska to be exact. She knew at a young age that she wanted to be a veterinarian. Now you would think in the Midwest everyone lived on the farm, but not her. Omaha is a metropolitan area. She wished she lived on a farm and would look in the Sunday papers for farms for sale to show her dad.

He would laugh and play along.

She went to Iowa State University and studied Biological Illustration, a new degree at the time. It paired well with both her scientific interests and her artistic side.

She graduated in 1989 from Iowa State College of Veterinary Medicine. She moved back to Omaha for one year, worked for 4 years in the Quad City, Iowa area, and lived by the Mississippi.

She enjoys the daily hustle and bustle of clinic activity, saying, “you never know what interesting case will come in next.”

A close call with cancer in 2010 gave her a whole new perspective on life and an appreciation for how her patients and clients feel when they are on the other side of the exam table.

Her family consists of 3 cats and 4 dogs, all rescues from the clinic.

Pink Kitty: Actually a dog! A pitbull mix with a heart of gold!

Josie: A french bull dog that was rescued after being attacked by another dog.

Figgy: A chihuahua mix that is shy and sweet.

Dragon Tail: Brought in by a client with an extreme case of Parvo. Dr. Jensen nursed her back to health and she became part of the ” Jensteen Family”

Big Daddy: a gray and tabby who was found by a client as a 4 week old kitten in a roof gutter.

Redrum: an orange tabby who was a kitten with a bad upper respiratory infection, that was left behind when the owners moved out of their house.

Agnus: a beautiful blue-eyed calico found in her neighborhood. An Arizona native, Melissa is a true "desert rat" and enjoys the 110 degree days. She spent her summers working at a local boarding stable learning to care for animals of all sorts, including horses,...

An Arizona native, Melissa is a true “desert rat” and enjoys the 110 degree days. She spent her summers working at a local boarding stable learning to care for animals of all sorts, including horses, fowl, poultry, cats, dogs, small ruminants, and one very stubborn steer. She attended Arizona State University Polytech campus for undergraduate studies and actually worked as a technician at Amigo before being accepted to vet school. She went to Western University of Health Sciences for vet school, located in southern California. Melissa considered the LA suburbs far too cold and returned to Arizona for her internship at a local emergency and specialty center (VCA ARECA in Mesa). She worked at a few other clinics in town before coming “home” to Amigo!

In her spare time, she cares for her two half-Arabian horses, Key and Bonfire, her 3 tortoises, and five dogs. The dogs include a Labradoodle named Donut, a Dachshund/ Miniature Pinscher named Otter , a Cocker Spaniel named Jackson, as well as two foster-failures, a Chihuahua named Ollie and her daughter, the half-Yorkie Wren (who you can usually see helping at Amigo as our Head Nurse!)

Teresa has been the office manager at Amigo since 1997 when Dr. Jensen bought the practice.

Teresa has always loved people and their pets. She has developed many friendships over the last years with our clients making sure all their needs have been met. She feels a bond of trust is very important to our clients since we are caring for their furry children, to insure we love them as much as they do.

Over the years she has collected many pets, including several clinic kitties that would not have made it if not for Dr. Jensen's compassion.

The joy of her life is a little gray and white kitty who only has one eye named Ruby. When she was just 4 weeks old she had upper respiratory infection so bad that her eye swelled to 5x it's normal size. Dr. Jensen removed her eye and she amazingly made a full recovery.

She also has Saffron, a rescue chihuahua a client brought in after witnessing her being hit by a car. One leg was broken and needed extensive care. After nursing her back to health Saffron made herself a place in the "Jensteen Family" Carolina (Room tech)
Carolina graduated from Pima Medical Institute where she discovered her true passion for animals. Before graduating, she completed her externship at the Arizona Humane Society where she learned what it really is like to be in the veterinary field and she's never looked back since. Carolina has been with us since July of 2018. She has a very lovable chihuahua named Minnie. When she's not at work she can be found relaxing at home with her loved ones, and nursing sick kittens back to health. Susan (Surgical Tech)
Susan has a passion for animals and people. She has years of experience working with small and large animals at nonprofit organizations and a petsitting business. Amigo Animal Clinic is the perfect place for her, and she has been with us since May of 2019. Susan has excelled in her training assisting the doctors and other staff. At home gardening, cooking, housekeeping, and crafts take up most her time. As of March 2019 she has adopted and coparents her two beloved felines Draco and Bellatrix. 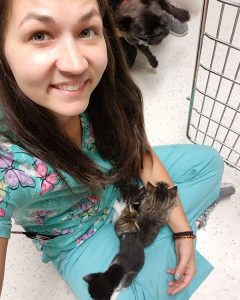 Christina (Receptionist)
Christina is a native to Arizona and has lived here most of her life. Christina's love for animals made her pursue her career in Veterinary Medicine. That is when she found Amigo Animal Clinic and has been with them since May 2019. Christina has four furry babies named Rosie, Crazy, Big Blue, and Prana. She also has two children named LeAnndra and Eli. During her spare time she loves to go on family adventures, hang out with friends, and spent time at home watching Netflix.

Font Resize
Contrast
Accessibility by WAH
Call Us Text Us